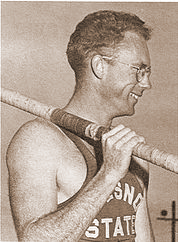 Fred Barnes had just switched from a bamboo vaulting pole-made famous by his world-renowned coach and mentor Dutech Warmerdam-to the more consistent steel pole when he enrolled at Fresno State in 1950. Barnes had completed two and a half years of service in the Armed Forces during the Korean conflict. He vaulted 12'6" at Turlock High School and equaled that height during a military meet in Meji Park Stadium in Tokyo, Japan.Warmerdam's coaching and Barnes' hard work and determination enabled him to clear 13'6" in his sophomore year. He tried, but failed to clear the qualifying height of 14' during the Olympic Trials of that year.

Undaunted, Barnes put in a summer of hard labor working for the Turlock-based Hardison's Chicken Trucking. Barnes would pick up chickens housed in forty-eight coops at the receiVing center and deliver them to various vendors. By the end of the summer and entering his junior year, he was a muscular 170 pounds. It was the added muscle and upper body strength the enabled him to set a then-Fresno-State-record of 14'8". He also won the NCAA championship at 14'6". His point total was enough to boost the Bulldogs to a third place tie with Stanford. The 14'8" was during the 1956 Olympic Trials. He finished in a six-way tie for the third place on the team, but lost out on fewer misses.

His all-time best of 14'8 1/2" came at the California Relays in Modesto. That earned him a gold watch and placed him second in the world behind the Rev. Bob Richards. He finished the year with the seventh highest world vault. An improvement of two and a half feet in one year's time was considered remarkable. Like Warmerdam's bamboo, steel had no bend, so the vaulter had to rely on strength and technique. This was in stark contrast to the slingshot fiberglass poles of today that require more of a gymnastic effort. "My technique was a long swing, bringing back the feet quickly, pulling back, elevating and pushing off,"Barnes said. "Dutch had a push off of 2'10" while mine was only 1'9". The technique also required a back twist. I was not too fast, about 10.4 or 10.6 in the 100, so I had to use a longer pole than the faster vaulters.

Barnes said some of his finest vaults were negated when he brushed the crossbar off with his trailing hand after he had already cleared the bar. "I had that technique down pat," Barnes laughed. "I did it at 13’ in the high school CIF meet and finished second. I was over the 14'10" winning height at the Olympic Trials, but did it again. You can bounce the bar and it usually will stay but you can't drag it." Barmes also had a back problem from bouncing off the foam rubber landing pit and hitting a cement wall during a 1953 meet in White City, England. Often when he competed, the twisting motion caused his back popped out.

A pulled hamstring muscle early in his senior year gave him a second place finish in the NCAA at 14'2". "Overall, I had a marvelous time, lots of fun at Fresno State, some great teammates, and of course, having Dutch as my coach," Barnes said. "I think winning the NCAA was a high point because my pole never reached me even though it arrived at the Lincoln, Nebraska Airport. I used a borrowed pole.

Our head coach, J. Flint Hanner had two rules. "No skiing and no sheeing." I twisted my knee skiing, so it was called the Barnes Rule. There never was any doubt about his nickname, the red hair and freckles made it easy. He taught school at Easterby Elementary and at Cooper and Tioga Junior High Schools. He taught math and history and coached the track teams. He also worked four and a half years for the postal service. Barnes helped his wife run an antique upholstering and refinishing store in the mining community of Mariposa into his eighties.