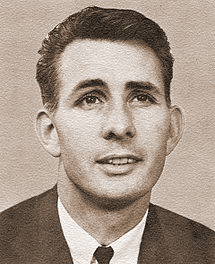 There were no radar guns when Don Barnett was throwing heat for the 1951 Fresno State baseball team, but no collegiate pitcher could get the ball to the plate any faster. "Don most certainly threw in the mid-90s," said teammate Jake Abbott. "He was just wild an enough that batters were not going to crowd the plate." Fresno State's late Hall of Fame coach Pete Beiden said Barnett threw the "heaviest" ball he ever caught. Few batters could even get a foul ball off his high hard one.

Barnett was Fresno State's initial baseball First Team All-American with a 11-0 record for a team that went 36-4. He averaged thirteen strikeouts a game. Ten of the twelve wins were complete games and six were shutouts. Don Barnett now lives in Citrus Heights and spends a lot of time with his second loves hunting and fishing. Barnett 's professional career was short and frustrating. At the end of the regular 1951 season, Fresno State could not beat the politics of collegiate baseball's big schools and was not allowed to participate in the NCAA playoffs. The Bulldogs went to Hawaii where they played fifteen games against club and military teams, winning most of them.

In a telephone interview from his home, Barnett said that after a starring career at Washington Union High School in Easton, he never planned to go to college. "I was just planning on getting a job and work for a living," Barnett said. "We [Washington] were beaten out for the league title by San Joaquin Memorial...Our American Legion 509 coach, Roy Taylor, talked Jake and I into going to the Fresno Bee-KMJ Baseball School. The school which ran for a week was really good. That's where I first met Pete, who was an instructor. I knew nothing about Pete or Fresno State, but several of the Baseball School All-Stars were talking about going to Fresno State and Pete took a group of us to Canada to play for Brick Sweagle's AIl-Stars. "Those players made up most of the lineup for the Bulldog freshmen team in 1949 that was unbeaten. In 1950, Barnett was 10-1, so his junior year numbers were no surprise. About two weeks after the trip to Hawaii, veteran Boston Red Sox scout Tom Downey arranged for Barnett to fly to Boston. Barnett pitched batting practice and a few innings in exhibition game. His most memorable time was meeting Ted Williams and having a long talk about hunting and fishing along with baseball. "Ted hated the press, but he was real friendly to rookies and teammates," Barnett recalled. "It was an experience meeting Johnny Pesky, Vince DiMaggio, and Bobby Doerr. At the time, Boston owner Tom Yawkey knew I would be drafted into the Marines, so I had a contract contingent on whether I could play. I was sent to Portland, Maine in a rookie league and I injured my index fingernail. I pitched a game in the fog despite pain and won it when I hit a home run."

The following spring, Barnett was in Sarasota, Florida for spring training with the big club. He pitched in two intra-squad games and didn't allow a run, but in the second game, Jim Piersol dropped a drag bunt on the third base line. Barnett tried to scoop and throw and suffered a muscle pull in the back of his shoulder. He was shipped to the BoSox AAA Birmingham team, but was there only a week when he received greetings from President Harry S. Truman to welcome him into the Marines. Barnett got no treatment for his sore shoulder while in the Marines. The Korean War ended in 1954, so he got a February discharge. The rest of his professional career was frustrating.

He reported with 150 players for the San Jose team, a Red Sox farm club. He was told to throw hard and then was released. Tony Robello signed him to a New York Yankee contract. Went to the Modesto California League team, threw hard batting practice, and again was released. That was the end of baseball for Barnett. He worked in aviation for a short time and then for Long's Drugs for eighteen years. He and his wife, who celebrated their 51st anniversary, spend time with a son and daughter and their families. Barnett loves his location which is close to his favorite fishing hole, Folsom Reservoir.