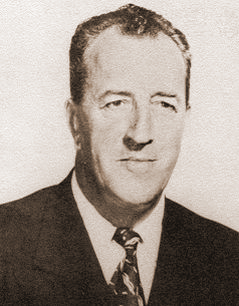 Fresno State College has had many great athletes but none has ever equalled the record set by its first great all-around athlete-Bob Baxter.

In four years between 1922 and 1926, Baxter won 12 varsity letters in four sports. The record has never been equalled nor, in this day of specialization, is it likely to be.

Baxter’s rugged, six-foot, 196-pound frame him a standout in football and he was versatile enough to switch from guard position to fullback in his final year at FSC. He competed in track and baseball as well but his real dish was basketball and old-timers still rate him as one of the all-time Bulldog greats in that sport.

Basketball officials took a much more charitable view of body contact in those days and Baxter’s physique was ideally adapted to the heavy going. He also owned a deft shooting touch and set a school record of 26 points in one game when that figure was considered a good night’s production for an entire team.