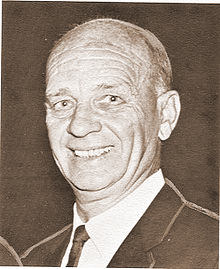 The old adage of "Jack of all trades, but master of none" is debunked when you are talking about the late Harold J. "Hal" Beatty. He was born in Los Angeles, but raised in Oakland where he competed in football and track at Roosevelt High School, Beatty is one of the most beloved Fresno State employees in school history. He was a track, football, and basketball athlete, head coach of varsity basketball, golf, tennis, boxing, and wrestling as well as an assistant coach for football. Beatty was the athletic director from 1956 to 1963 and dean of men from 1947 until 1963.

Beatty first hit the spotlight-something he avoided with a passion-in 1931 when he combined with Hamilton Knott, Paul Bailey, and Jess Markle to set a college division two-mile West Coast Relays record. Beatty was elected captain of the Bulldog track team in 1932. When he graduated from Fresno State in 1933, he coached football at Albany High School in 1934 and led the football and track programs at Napa High School from 1935 through 1936. In 1937, he was hired to head freshmen football and thus began thirty-three years of service to his alma mater.

When Fresno State had a job opening in either athletics or academics, they plugged in Beatty. He was appointed head basketball coach in 1939. He wore a pork pie hat which he slammed to the floor and jumped up and down on when an official made a bad call. Beatty entered the armed forces in 1942 and was a lieutenant commander in the Navy. Discharged in 1946, he coached basketball for two more seasons. Beatty was a favorite of retired Bulldog track coach Red Estes. "You meet a lot of smart people at universities, but it is rare to meet someone with real wisdom and there is a big difference," Estes said. "Hal had wisdom, great insight. He had done it all: coach, teacher, administrator, athletic director, and even dean of men and he did everything well, cheerfully and never sought any glory or recognition. Whenever the school had a need, they called Beatty and he handled any job they gave him. He was a pleasure to be around. For years, he played Santa Claus for Children's Hospital when it was still in Fresno. I know the people in the athletic department really liked and respected him. He was an excellent educator.

When I came, he served as a clerk with Bess Lewis at the West Coast Relays and he worked hard. He was always an encouragement to his staff and to the students."

As athletic director he hired football coach Cecil Coleman and basketball coach Harry Miller as well as elevated Dutch Wamerdam to head track and field coach. Beatty began a love affair with the Zeta Mu in 1928 and was very active when that fraternity became Sigma Alpha Epsilon. Beatty's favorite pastime was golf. He was a longtime member of the Fort Washington Country Club and once had a single digit handicap. He never turned down a job with the Rotary Club. After leaving Fresno State, he served two terms as president of the Bulldog Foundation.