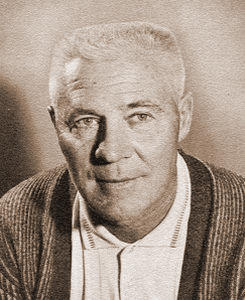 John Peter Beiden, a Russian immigrant, was hooked on baseball from the first time he was asked to catch at seventeen and he loved the game throughout his lifetime. Beiden became a legend in a most self-effacing way with his own "Beidenese" language that very few could understand, but everyone enjoyed. He was a popular speaker, but he never felt that was his calling and often got the most laughs when he was trying to be serious. Beiden was the head baseball coach at Fresno State for twenty-two years and the campus baseball park is named for him. Former player Tom Sommers idolized his coach and spent untold hours caring for him when Beiden was wheelchair-ridden in his later years. Following Beiden's death, Sommers spearheaded a drive that raised money for the construction of a seven-foot statue of Beiden which occupies a corner inside the park.

Beiden not only consistently produced winning teams, but this master of baseball fundamentals also produced men of character, many of whom became outstanding high school, junior college, and college coaches in their own right. He competed with some of the best teams in the country on a budget so small it was laughable. Beiden allowed players to purchase their own bats for years until athletic director Cecil Coleman put an end to that practice. Beiden loved to talk baseball. "I always had to go out and find work aid jobs for my players," Beiden stated. "John Euless gave me a $100 scholarship and I gave that to Earl Smith. In my entire career, I gave just four players $400; most got $100 to $150."Players on some of his earliest teams often didn't get enough to pay for tuition and books, so they had to sign up for work aid.

For Beiden, there was a correct way to do everything from putting on a uniform to playing your position. He was an icon when it came to coaching pitchers and was hired at Fresno State in 1948. Within four years, he put together a team that went 36-4, one of the best win-loss records in college baseball history. His Bulldogs finished second in the California Collegiate Athletic Association in 1948 and 1949 and won the championship in the next two seasons. Beiden seldom went out of the San Joaquin Valley to recruit players for his early teams and every starter on the 1951 team including the top three pitchers were from Fresno, Visalia, or Exeter.

That team featured unbeaten pitcher Don Barnett, the school's inaugural baseball First Team All-American. Beiden had already developed two of the valley's all-time best pitchers, right-hander Mike Garcia from Orosi High School and left-hander Vic Lombardi from Tulare when he was hired at College of the Sequoias in Visalia in 1946. In 1948, he was offered the Fresno State job. "The money wasn't the thing because Tulare had offered me more to come back there, but I welcomed the opportunity at Fresno State. It wasn't easy. We didn't start from respectability. We came from nothing at Fresno State. Many teams we played didn't even know where Fresno was." Beiden's teams won nine CCAA championships, made the playoff finals four times, and got to Omaha for the College World Series in 1959 where they finished third and were ranked third in the nation.

He was voted into the Fresno Athletic Hall of Fame in 1964 and the Collegiate Baseball Coaches of America in 1972. His record was 601-268. The list of his players who became coaches includes: Augie Garrido, who is the winningest coach in collegiate baseball history; Beiden's successor Bob Bennett, who won 1,302 games in thirty-four seasons; and Len Bourdet, who at retirement was the winningest community college coach in California history. Some well-known high school and junior college coaches who were Beiden disciples include:

There was a contrast in the furor created by the 2008 Fresno State World Series champions and the team's third place finish in 1959. "I was so proud to have come that far in ten years from nothing to the highest peak, but there was no big fuss made. They had a party for the kids and that was about it. It didn't help recruiting a lot because we didn't have scholarships to offer. We lost some very good recruits who went to other schools because we couldn't offer a large enough scholarship." Beiden never forgot where he came from. He was one of thirteen children born to Henry Beiden. "We were easy to feed because you either ate what was there or you didn't eat,it was that simple. There were a lot of soybeans in our diet,"Beiden said. Beiden came to the United States when he was J.Peter Beiden 63 six years old. His parents with their seven children made the trip, losing one child on the journey. An uncle arranged for a little two-room house which Beiden said was about as big as his kitchen. He went to Kirk School until the fourth grade and then the family moved to Sanger. It was at Sanger High where he met the first of three men who most influenced his career in baseball. Frank Trine was the Sanger coach and later the coach at Redlands College where Beiden and his brother Hank went to school. Trine decided Beiden should try catching. "I'd never caught, but I think the coach figured, 'We got a stupid guy here who's not afraid of anything, so we'll make him a catcher," Beiden recalled. "You can imagine the kind of job I did. It was a butchering job, but I loved it. That's the first time the game ever awakened itself to me."

Beiden's wife, Martha was a huge asset to his success. She recalled that when Beiden was at Tulare High, he coached all four sports and drove the school bus for $135 a month. She also remembers helping Pete get the field ready for an exhibition game. "Work aid people were supposed to do it, but Pete and I were the work aid and I haven't got paid yet," Martha said, laughing. Martha preceded her husband in death. If Beiden was looking down today, he would be very proud of the baseball program's success as he laid the groundwork.