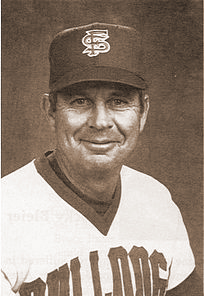 Through the years, baseball has probably been the most popular of all sports in Fresno. At the collegiate level, Pete Beiden had a major role in shaping baseball interest while coaching throughout the Valley, settling in to a twenty-one year career as Fresno State's head baseball coach. When Beiden passed the torch to Bob Bennett, who compiled an enviable 1,302-759 record, spanning thirty-four years from 1970 to 2002, it is vital to note that Bennett had played ball for Beiden throughout his college years. Beiden and Bennett are in the American Baseball Coaches Association Hall of Fame. Bennett was named the National Collegiate Athletic Association Coach of the Year in 1988 by The Sporting Newsstand and also won the coveted Lefty Gomez Award in 2000. Oklahoma-born, but Fresno raised, Bennett fits the image of "hometown boy makes good." It was inevitable that Bennett would make a natural transition from being an outstanding catcher for Roosevelt High School (Class of 1951) to four-year letterman and two-time team captain for the Bulldogs during the Beiden regime. Bennett played the catcher position like he owned it. He set a school record in 1953, going errorless during 224 total chances. He anchored teams to California Collegiate Athletic Association titles in 1954 and 1955 and was named All-CCAA twice. He graduated with a degree in physical education in 1956, then added a master's in the same subject in 1958. He was ready to conquer the world or at least a small piece of it.

Upon graduating from Fresno State in 1956, he was hired as head coach at Kingsburg High School for two seasons before moving to Bullard High School as head coach. He became notably successful as prep strategist as his Knights teams tallied 138-16-3 in ten seasons. Bennett's coaching string at Bullard was interrupted in 1967 when Fresno State, acting on Beiden's obviously high recommendation, hired Bob to fill in for his esteemed tutor during that year. Bennett sprang into action as the Bulldogs finished the season at 38-10, won the CCAA championship, and a berth in the NCAA regional playoffs. Bennett went back to Bullard when Beiden returned from his one-year sabbatical and then was hired as Beiden's permanent replacement when Beiden retired in 1970. It was the start of another truly great run for Fresno State baseball. The only thing missing from Bennett's jaw-dropping resume is the NCAA title; his career is the stuff of Legend.

Bennett became the seventh coach in NCAA history to reach the 1,300-win plateau after becoming the 10th coach to hit the 1,200-win mark. He succeeded in producing twenty- six consecutive teams with more wins than losses; in fact, only two of his teams during thirty-four years had losing records. He was Conference Coach of the Year fourteen times as his teams won seventeen conference titles and earned berths in twenty-one regional NCAA playotis., The Dogs were in regional tourneys during twelve of Bennett’s last fifteen years of coaching. His teams averaged forty wins a season from 1979 to 2002. He coached thirty-two players to All-American recognition, fourteen of which were pitchers with only two catchers. Dick Ruthven (1972), John Hoover (1964), Bobby Jones (1991). Steve Soderstrom (1993), and Jeff Weaver (1997) were all first round draft pick pitchers. Notably, thirty-five Bennett-coached players nineteen of them pitchers -were signed to major league contracts. Bennett's prowess as a recruiter does not need any embellishment; it is simply a matter of record. His stature as parent, teacher, and coach extends far beyond the boundaries of Fresno, evidenced by his selection as head coach of the U.S. National Teams in 1983 and 1986 plus assistant posts in 1977 and 1979, his former presidency of the American Coaches Baseball Association, and his service on ABCA Hall of Fame and NCAA AlI-American election committees. All of this-honor after honor-for a coach who, when his home games were threatened by rain, always would be out before dawn with his players covering the infield with tarps. Bob Bennett was a great inspiration to his players. Bobby Jones, a former major league pitching star, pays an often heard tribute to his college coach, "He helped us out in so many ways. not just about how to throw a pitch, but about how to work and to accept responsibility and set goals look for the good things in our lives. We owe him a lot." On July 3, 2010, Bob Bennett was inducted into the National College Baseball Hall of Fame, a fitting honor for this legendary coach.