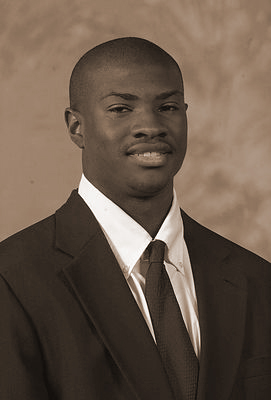 From Atwater High School to Fresno State to the National Football League, the 6-foot-1, 190-pound speedster commanded the attention of opposing teams. He was a touchdown threat every time he touched the ball -- whether hauling in passes or returning punts and kickoffs.

Overlooked by many major college teams because of a perceived lack of speed, Berrian signed with the Bulldogs and stamped his name all over the school record book before being selected by Chicago in the third round of the 2004 NFL draft. His 25 career TD receptions tied him for the No. 1 spot. He ranked second in career receptions with 199, and he was No. 1 in career all-purpose yards with 5,826, which also set a Western Athletic Conference record.

In a career distinguished by dozens of big plays, one will be remembered forever by the Red Wave: Berrian's 96-yard TD return of the second-half opening kickoff in a 32-20 victory at Wisconsin in 2001. "I caught the ball and everything seemed to open up," Berrian said. "It was just wide-open field."

He totaled 300 yards against the Badgers, with eight catches for 102 yards, two rushing attempts for 16 yards, 29 yards in punt returns and another 153 yards on four kickoff returns. Berrian finished the season with a school and WAC record 2,726 all-purpose yards and earned first-team All-America honors. He was the only player in WAC history twice selected first-team all-conference at two positions -- wide returner and return specialist.

During Berrian's four seasons, the Bulldogs compiled a 35-18 record and made four bowl appearances. Just like at Fresno State, Berrian had many long TD receptions in the NFL. He could take a short pass and outrun defenders to the end zone or simply blow past defenders and latch onto a long pass.

Berrian's eight-year NFL career was evenly split between the Bears and one of their fiercest rivals, the Minnesota Vikings. In 2006, he helped the Bears reach Super Bowl XLI, where they fell to Indianapolis. Berrian started 15 games during the regular season and had 51 receptions with six TDs. He added 14 receptions and two TDs, including a 68-yarder in the playoffs.

Berrian was wooed to the Vikings in 2008. That year he totaled an NFL career high 964 yards receiving, averaging 20.1 yards per catch -- highlighted by a franchise record 99-yard scoring reception against the Bears. The following year Berrrian caught 55 passes, the second highest single season total in his NFL career.