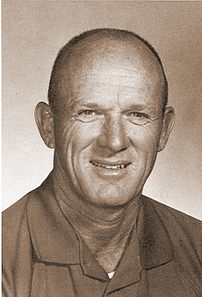 One of the best ways to judge the success of a coach is the testimony of his players, especially those who reach the highest level of their sport. Few high school baseball coaches in Fresno have been more successful than Oliver Hastings Bidwell. In nineteen seasons (seven at Roosevelt, six each at Fresno and McLane), Bidwell was 227-80-3. His teams won eight league titles, two Delano tournament championships and his American Legion teams were always among the best in the state. Bidwell was born and raised in Fresno and took up baseball at an early age. His father played in the old Twilight League. Ollie attended Winchell Elementary, Longfellow Junior High, and Roosevelt High. Bidwell enrolled at Fresno State and played two seasons for coach Stan Borleske, then went into the armed forces for four years before returning to Fresno State for another two seasons. He was a first team All-Conference outfielder in his senior year. In the spring of 1958, Bidwell began coaching at Fresno High. Powered by future major leaguers Dick Ellsworth, Jim Maloney and Pat Corrales, the team was 18-0 in high school competition and 25-1 overall with a loss to the Fresno State freshmen, a team they beat three other times.

Cal-Hi Sports said the Warriors of that year was one of the best, it not the best high school team in California history. Left-handed Dick Ellsworth was 15-0 and Maloney was 3-0, striking out twenty-five batters in a shutout against Merced. Catcher Pat Corrales batted .392 during his senior season. "By my junior year, we had spring training just like the pros," Ellsworth said. "In December, we worked on running and throwing on our own...Ollie put us through long, hard practices with a lot of conditioning and an emphasis on fundamentals. We would play 75 to 80 games in a full year. Our high school season was less than thirty games, but we played American Legion, a twice-a-week night league during the summer, and in pre-season, we played college freshman teams.

The highest compliment I can give Ollie came in my first year of spring training with the Cubs. The pitchers went through all the drills and I never once did the wrong thing. Pitching coach Freddie Fitzsimmons asked me, 'Where did you learn all that?" I told him, 'In high school. "Maloney said Bidwell had hard and fast rules on and off the field and treated everyone equally. The Warriors had a thirty-seven game high school win streak beginning with the last nine in 1957, the full season in 1958, and nine in 1960. That and Fresno's fifteen shutouts in 1958 are still state records. In addition to his big three, Bidwell coached pitcher Mike Uizola. outfielder Mike Noakes at Fresno High, and Bob Bennett at Roosevelt. After coaching, he served as CIF Commissioner from 1977 to 1983 and Central Valley Junior College Conference commissioner from 1980 to 1983. He took over as athlete administrator for the Fresno Unified School district for sixteen years. During and after his coaching career Bidwell was a football, baseball, and basketball official for thirty-five years.