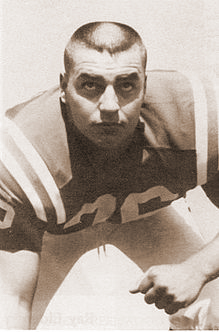 The Sonny Bishop story is interesting as he played a few minutes of football in his senior year at El Cajon Valley High School and never was a full-time starter in two years at Riverside Junior College. Fresno State was where he blossomed. Bishop was a two-year All-Conference tackle for Fresno State coach Cecil Coleman and was a force for the 1961 unbeaten Mercy Bowl champions. He played nine seasons in the American Football League, seven as a starter at Houston. Born in South Dakota, his parents were farmers. The family moved to San Diego during World War II. Bishop's first athletic success came as a ten-year-old third baseman and catcher on the San Diego Little League championship team that qualified for the annual Little League World Series, where they finished third. His high school athletic career was interrupted by austonritis (chronic water on the knee), so he was inactive until his senior year. He made the football team.

His early goal was to be a veterinarian-athletics weren't on the radar screen. "I had a job in San Diego, but several of my friends were going to try out for the Riverside Junior College team," Bishop said in a telephone interview. "I decided to tag along. Coach Howard White needed to fill out his thirty-three-man roster. He got me a job, so I moved to RiversIde. I was mostly cannon fodder that first season. Several of the players were All-CIF and our team was ranked #2 JC in the nation behind Bakersfield. The second year, three of us alternated as starters at tackle." He was 6'2" and 220 pounds by that time and he only gained another twenty pounds at Fresno State. Los Angeles State had offered him a scholarship, but when Coleman came by, he convinced him to become a Bulldog. "I knew Fresno was an agricultural school and I was brought up on a farm and they had a winning program, so I went to Fresno State and played three years. It was the best move I ever made,"Bishop said. "I loved my time in Fresno and I'll never forget the Mercy Bowl. It was a wonderful game and helped put Fresno State on the map."

He was drafted by the San Diego Chargers in the AFL, but was traded to the Dallas Texas Cowboys and played in the 1962 championship game. Al Davis, the coach for Oakland, signed him. Bishop was a starter before being involved in a three-for-one trade with Houston for running back Billy Cannon. He was All-Pro at Houston in 1968. Sonny was switched from tackle to guard, playing at 250 pounds. Bishop said he competed with some great players. After he retired, Sonny talked to quarterback George Blanda, who asked him how he would feel about playing today. Bishop replied, "It is a totally different game and I would be pretty small by today's standards. There was some talk one time in Houston of moving me to fullback. I wish that would have happened." Bishop had to work in the off-season to make ends meet, primarily in real estate and construction. After graduating from Fresno state, he moved to Florida and began a construction business. Sonny and his wife have two daughters and a son.