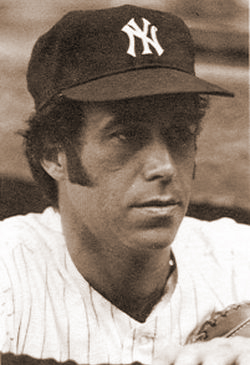 If there was ever a pitcher with potential, Wade Allen Blasingame was it. They nicknamed the Roosevelt High School left-hander, "The Blazer," and his three-year record for the Rough Riders was 26-0. That's right: no losses. Blasingame's Roosevelt coach, Jake Abbott, recalled when he first saw Wade. "Earl Jones, a former left-handed pitcher of note, lived by Sequoia Junior High and I knew him well," Abbott said. "Jones told me to come watch this left-hander who was really good and would be coming to Roosevelt. He just dominated junior high batters and we had a strong junior high league at that time. He came as a sophomore in 1960. The thing I remember I had to [do was] really stay on him to workout and stay in shape..He was easy to coach as long as he worked out. He was the best I ever had and he had the best curve ballI ever saw. He went right over the top and he had this twelve-to-six curveball that just exploded. I remember we went to the Delano Tournament which was big at the time. He worked five innings against Tulare and struck out fourteen of the fifteen batters he faced."

The Milwaukee Braves signed him to a contract on June 5. 1961. In his first workout, Whitlow Wyatt, the Braves pitching coach, said just what Abbott had observed. Wyatt said Blasingame's curve ball was the best he'd ever seen for a pitcher that young. It appeared the sky was the limit. He was being touted by the Milwaukee media as the next Warren Spahn. In 1965, he won sixteen games by the beginning of September and appeared well on his way to a twenty-plus wins season. Then, a series of setbacks struck. Blasingame came down with tonsillitis and dropped in weight from 205 pounds to 189. Even worse, his control left him and he finished the season 16-10. In 1966, he reported to spring training in West Palm Beach after having his tonsils removed and regained his strength over the winter by hunting, weight lifting, and working out in the gym.

He looked good and the Braves were optimistic. Then, pitcher Joce Niekro entered the picture. Blasingame and Niekro were at a bar and Niekro got into a scuffle and Blasingame came to his aid, resulting in a broken finger on his pitching hand. He tried to rush in order to get back on the mound and hurt his arm pitching in Philadelphia. Blasingame finished the season 3-7. The following spring, he looked good in training, but as Blasingame pitched a batting practice, Cookie Rojas hit a line drive, hitting him. He won one more game for the Braves and was traded to Houston. The change of uniforms didn't help. He was hit in the groin by a line drive by Julio Javier and ended 4-7. Blasingame pitched for Houston until 1973 and then retired with a cumulative record of 46-51. "It seemed like every time my arm started feeling good, something happened,"Blasingame said. "It was unfortunate that my career was so short. I guess I could've taken better care of my body off the field, but I was so young."

The upside of the Houston experience was that pitching coach Jim Owens introduced Blasingame to Alaska. For a guy who cherished hunting and fishing, it was love at first sight. Owens accompanied him on his first trip to Alaska. Jim came back, but Wade stayed and he's still there. Blasingame went to work for the Houston Contracting Company. "A good share of the time, we work in the dark. During winter months, we see light six or seven minutes a day. It takes some getting used to," Blasingame said in an interview in 1983. "We work by generators. Of course in the summer, it is light for all, but a couple hours a day." Wade's mother and sister are still in Fresno and his wife's parents are in Atlanta, but most of his time is spent in Alaska.