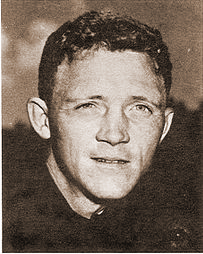 If was asked to describe former high school and collegiate level football coach J.R. Boone in five words, no phrase would fit him better than a "man of action, not words." He was not a passive kind of guy. Boone was not a tightly-wound man. He worked hard at being the best coach that he could be and knew how to relax away from football. The initials J.R. don't stand for anything and he was a man of few carefully-chosen words. Born in Clinton, Oklahoma, Boone played football for Sand Springs High School and was good enough to be selected for the Oklahoma State All-Star Game in 1943. He went on to play for the University of Tulsa, earning nine varsity letters before graduating with degrees in physical education and social science. Boone was a four-sport athlete, lettering in football for four years, twice in basketball and track, and once in baseball. He was the captain of his football team, called "Junior" by his teammates, named Tulsa's "Outstanding Athlete" and selected on a variety of All-American teams.

He was drafted in the 22nd round by the National Football League's Chicago Bears and played for them from 1948 to 1951 before being traded to the San Francisco 49ers in 1952 and then to the Green Bay Packers in 1953. His versatility enabled him to play several positions including offensive back, defensive safety, punts, and kickoff returner. Boone's six-year pro career starts included 497 yards in 130 carries and five touchdowns in sixty-three games, sixty-nine pass receptions for 1,251 yards, eight touchdowns (18.1 average per catch), and seventy-two punt returns for 725 yards (10.1 average).

When he decided that it was time to try his hand at coaching, his first job was as an assistant coach at Selma High School in 1955. He stepped up as Lindsay High School's head coach from 1956 to 1958, winning the league title in 1958 by scoring 233 points to their five league opponents nineteen. Lindsay's best-ever team finished the season 9-0-0. He switched to Sanger High School in 1959, orchestrating another undefeated championship season and adding four more consecutive league titles during 1960-64. He signed on as head coach at Reedley Junior College in 1966 and his teams would claim four conference titles between 1966 and 1972 plus the California JC State Championship in 1971. Boone was later named to the California JC Coaches Hall of Fame. J.R.'s final coaching job was at Fresno State. Following Darryl Rogers, who was 42-32-1 from 1966 to 1972, J.R. was 2-9-0 as the Bulldog's head coach in 1973, 5-7-0 in 1974, and 3-9-0 in 1975. After the 1975 season, J.R. resigned from Fresno State. He was still a fan favorite and certainly respected by the players that he coached.