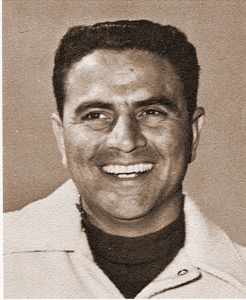 Auto racing, ranging from low budget midgets and modified hardtops to big bucks Indy machines, has enjoyed a large and loyal following in Fresno for more than fifty years. Motor sports old-timers still enjoy reliving memories of steamy summers when midget autos and souped-up stocks roared at Airport Speedway and Kearney Bowl. But nothing surpassed the excitement of the 1950s, an era when Fresno was proudly represented at the Indianapolis Speedway by Billy ”The Mad Russian" Vukovich, Duane Carter Sr., and Johnny Boyd. All three drivers grew up in Fresno.

Boyd drove in a dozen Indy 500s, beginning with the tragic 1955 race when his boyhood idol Bill Vukovich was killed during a crash which involved Boyd and two other drivers, Rodger Ward and Al Keller. Boyd, a handsome crew-cut favorite with female fans, was never happier than he was when racing. He was as impassioned as anyone could be about his sport. It's all he ever wanted or ever expected to do with his life. It was so ironic that Boyd was involved in the wreck that took his hero's life. "Vukie" gave Johnny his first midget ride, shared driving tips with him, and encouraged him when he sensed that he needed an emotional lift. Inevitably, Boyd would be asked repeatedly about his reaction to "the accident" at Indy in 1955. He would be obligated to explain what had happened. The details were that Vukovich had a half-lap lead on the back straightaway during the 57th lap, trailing Ward, Keller, and Boyd when a broken axle sent Ward's car out of control and flipped it over. Keller, attempting to avoid hitting Ward, broadsided Boyd's car and then Vukovich's car sheared off Boyd's rear wheel, causing Vukovich's to sail over the retaining wall, landing upside down, and bursting into flames.

Boyd continued to compete in eleven more Indy 500s, finishing five of them, but also crashing during his first and his last Indy 500 starts. He also competed in six World Championship races when the Indy 500 was part of the FIA World Championship series from 1950 to 1960, finishing on the podium once in third place. Boyd's racing career began on quarter-mile midget tracks. He was one of the most popular wheelmen at tracks from Contra Costa to Gardena. During a stretch from 1954 to 1966, Boyd raced in the AAA and USAC Championship car series and was the runner-up in a major race in Milwaukee in 1959. He was in the top ten thirty-one times in fifty-six starts and won USAC feature 100-lap races in Fresno in 1957, and Pacheco and Gardena in 1957 and 1959. He retired after failing to qualify for the 1967 Indy 500. Boyd received many honors including selection to the 500 Oldtimers, Motorsports Press Association, Bay Cities Racing Association, Kings Speedway, and Fresno Hall of Fame plus receiving the prestigious 2003 Oldtimers Club Meyer Award for his exemplary service to racing. He passed away in 2003.