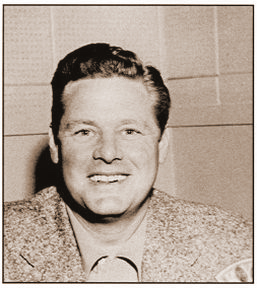 There was a little bit of Dizzy Dean in the makeup of the flamboyant actor, comedian, and radio-TV announcer, George Bryson, who was born in Missouri and grew up watching the St. Louis Cardinals. The "Ole Cottontop" as he was affectionately nicknamed, had the same folksy style of delivery as Dean, but was smoother and used better English.

Bryson came to Fresno in 1939 where he appeared as a singer and comedian on radio station KMJ. He spent two years in the U.S. Marines during World War II and returned to Fresno after being discharged. Fresno Cardinal general manager Marvin Milkes hired him to be the "Voice of the California League Cardinals" from 1947 and 1948. Milkes left Fresno to become GM in Pocatello, Idaho, but returned in 1950 and hired Bryson again.

Bryson worked all of the home games from Euless Park, but Bryson re-created the experience for away games by using tickertape to follow the progress of the game in a colorful way at the local radio station studio. Bryson also helped organize youth baseball clinics in Fresno and with Al Radka, was instrumental in the formation of the Fresno "Hot Stove" dinner which became one of the finest annual events of its kind in the nation.

After the 1955 season, Bryson jumped from Fresno to the major leagues to announce the televised games for the National League Cincinnati Reds. He was in the booth in 1960 when the Reds played the first night television game ever shown in color. Bryson left the Reds and spent two years with the Los Angeles Angels before three seasons with the Kansas City A's, sharing the booth with Monte Moore and being bossed around by Charlie Finley, who added a female to the broadcasting twosome. Bryson suffered a heart attack in 1964 and died at the early age of fifty. He was buried in Belmont Memorial Park in Fresno.