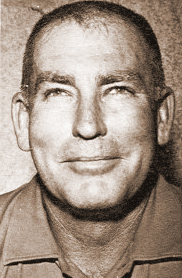 Bob Burgess was born to be a Bulldog, even if he didn't know it at the time. The big, strong, and tough-as-leather Burgess was head line coach for nine Fresno State football head coaches in a thirty-two year career that spanned from 1948 until his retirement in 1980. Loquacious coach Jimmy Bradshaw used the same tactic to recruit Burgess as a Bulldog that Burgess later used to recruit players from all over California. Following an All-Southern California season as center for Long Beach City College, he was ready to accept an offer to play for Stanford until Bradshaw took him to Fresno. "I fell in love with the San Joaquin Valley and all those ditches full of water, the mountains, and so much open land," Burgess said. Burgess played three seasons for Bradshaw as the starting center in a complicated double wing formation in which he had to snap the ball on every play. In his senior year, he was All-Conference and Little All-Coast for a team that went 10-0-1.

Following World War II during which Burgess was a crew chief in naval aviation in the South Pacific, he returned to Fresno to coach the freshmen team for two years before head coach Kenny Gleason made him line coach in 1948. Darryl Rogers was born in Long Beach and went to Jordan High while Burgess went to Woodrow Wilson High School, but both played at Long Beach City College. Burgess always said Darryl was one of his favorite reclamation projects. Rogers laughs at that statement, but had a lifelong affection for Burgess. "I was younger, but we followed the same trail except we went to different high schools," said Rogers, now retired in Fresno. "I loved the guy. He recruited me to Fresno State, so I played for him, I was assistant coach with him and later I was head coach over him. Bob was everything to his players. He kicked your butt, he loved you, he encouraged you, he could tell you everything you did wrong, he would talk to you off the field. He was in charge of the job program, giving jobs to guys for $50 a month. He could motivate, he had a story for every topic. I never had a bad day with Bob...he loved Fresno State."

In that respect, he was a lot like Jim Sweeney. Darryl agreed and wondered what it would be like if they had been on the same staff. "Bob created some controversy at times and I was usually in the midst of it, but he was loyal to his country and his school," Rogers continued. "I wanted him to go with me to San Jose, but he said no. He was tied to Fresno State." Rogers said Burgess was the same as all the other coaches at that time including Dutch Warmerdam and Pete Beiden, who all had to teach classes along with coaching. "I am not sure whether Bob ever got to a full professorship which means that, most years, he probably didn't make more than $20,000," Rogers said. "And it was [a] nine-month contract, not twelve. So several coaches had summer jobs to augment their pay." Some other notable head coaches that he worked under after Bradshaw and Gleason were Pix Pierson, Duke Jacobs, Van Galder, Cecil Coleman, Phil Krueger, Rogers, and J.R. Boone.