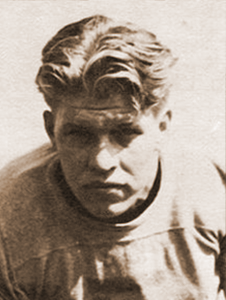 This Fresno High School graduate went to Stanford University in 1932. He was part of the famous team known as the "Vow Boys" under Coach Claude B. "Tiny" Thornhill. The vow was made in his freshman year to never lose to USC and they didn't. Stanford's three-year record was 25-4-2. Calloway played in three Rose Bowls, losing to Columbia 7-0 in 1933 and to Alabama 29-13 in 1934. The Redskins did beat Southern Methodist 7-0 in 1935. Callaway earned a medical degree at the Washington University School of Medicine and served as a captain in the Army Medical Corps.