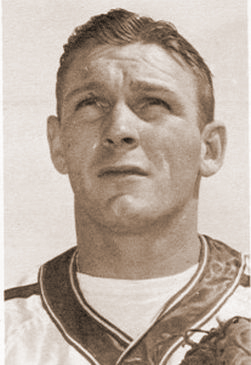 Chandler played a key role in fielding some of the best men's and women's softball teams in the country. "Dutch" surfaced early as his nickname and he was born in Champaign, Illinois, but his family moved to Bloomington, Indiana when he was still a youngster. Chandler was a versatile athlete at Bloomington High School, playing football, baseball, basketball, and track prior to his graduation in 1939.

From 1939 through 1941, he toured the United States as a member of the famed House of David basketball team and also played semi-pro baseball. Chandler was a natural entrepreneur who later became a successful used car salesman. When World War II erupted, Chandler enlisted in the Air Force and was assigned to Hammer Field in Fresno in 1943. He immediately organized, managed, and caught for the Hammer Field Raiders, who won World Championships in 1943 and 1944. Kermit Lynch of Delano was already an outstanding pitcher and Chandler induced big Al Linde to enlist in the Air Force.

Hammer Field had a solid all-around team, but Lynch and Linde were the backbone of the championship teams. Chandler remained in Fresno following his discharge and went to work for Roma Winery. It was then that he put together the Fresno Rockets, one of the finest women's softball teams in the history of the sport. Chandler managed the early teams, but shared that role with Bernie Amaral when Fresno won three world titles. Chandler was part of the Rockets for eleven years which produced Softball Hall of Fame players Kay Rich, Ginny Busick, Jeanne Contel, and Gloria May. He also had ten All-American players.