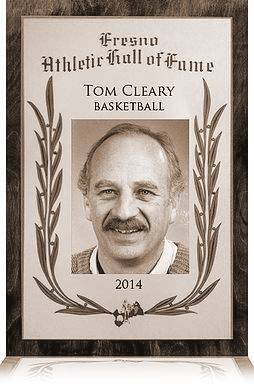 Playing for Jerry Tarkanian at San Joaquin Memorial High School, the 6-foot, 6-inch Cleary was the star of the team, even helping the Panthers upset powerhouse Edison High in 1957. But it wasn't until Cleary took over as Memorial's coach that the Panthers would end years of frustration by winning their first league championship in 1968.

​Once they got a taste of winning under Cleary, Memorial developed into a state power that dominated headlines and attracted scores of college recruiters to their games.

​In Cleary's 11 seasons at the helm, the Panthers compiled a 195-78 record. They won six North Sequoia League titles, three CIF Central Section championships (1970, 1972, 1973) and swept the prestigious Tournament of Champions - the forerunner of the state championships - in 1972 and 1973.

​During one span, the Panthers won 49 straight NSL games. More impressively, in the six consecutive seasons that Cleary had Roscoe, Clifton or Sammy Pondexter on his roster, the Panthers won 129 of 151 games against competition that included some of California's top high school programs.

​Roscoe Pondexter graduated from Memorial as California's all-time boys' high school scorer with 2,288 points, and Clifton Pondexter was a first-round draft pick of the Chicago Bulls in the 1974 NBA draft. David Tucker, another athlete coached by Cleary on the Memorial basketball team, set the national high school triple jump record.

​Following his coaching career, Cleary became a dedicated community volunteer who gave many hours to helping the homeless at the Poverello House and other individuals in need of help.