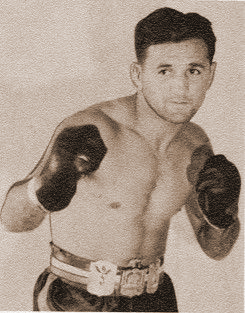 The name, Raffaele Capabianca Giordano, would have been too much of a mouthful for boxing fans to say, so the Italian-born, Fresno-raised newsboy was dubbed Young Corbett III when he entered the ring as an amateur. Corbett is the only Fresnan to ever hold a world boxing title, winning a ten-round decision in 1933 against Jackie Fields to claim the welterweight championship in San Francisco. Sadly, 100 days later, Corbett was knocked out in the first round by tough Irishman Jimmy McLarin in Los Angeles and lost the crown. Many boxing writers blamed Corbett's manager, Ralph Manfredo, for scheduling such a tough opponent so soon after Corbett's biggest victory. In any case, it was a devastating defeat for his legion of Fresno fans. Corbett's career was meteoric from its start in 1919. In 1926, Corbett won twenty-two bouts, nine by knockouts and he was in his prime from 1929 to 1933. He lost a twelve-round decision to Sammy Baker in Brooklyn in his last fight of 1928 and didn't lose another until the McLarin fight in 1933. In twenty-nine bouts, he only had two draws.

Corbett's devastating left fist and great skill in pounding an opponent's body with saber-like blows gained him high respect in United States boxing circles. Corbett didn't have many knockouts, but usually gave a classic boxing lesson to his opponent. The McLarin loss wasn't the end of his career, but he did cut back on the number of yearly contests. In 1937, Corbett knocked out Gus Lesnevich and in the following six bouts, his only loss was to Billy Conn, whom he defeated earlier that year. Conn will forever be remembered as the man who was leading in points against Joe Louis after eleven rounds, but tried to push his luck and was knocked out by Louis in the thirteenth. Corbett won an overweight bout with middleweight champion Freddie Apostoli. He was recognized by the California Boxing Commission as "the middleweight champion," but in a rematch for the title in New York, Corbett was knocked out in the eighth round. After winning a ten-round decision over Sheik Rangel in Fresno on August 20, 1940, Corbett retired at thirty-two. In his prime, Corbett was 5'7" and weighed anywhere from 132

Won world welterweight title in 1933. 175 fights with ten losses in twenty-two years. Never lost an amateur fight. Corbett-also known as Ralph Giordano-was overwhelmingly popular with his fans. The late Billy Mahoney, a boxing historian, idolized Corbett and put together a slick- page magazine devoted to the boxer. His statistics list 175 fights for Corbett over a twenty-two year career with only ten losses and ten draws. Corbett was inducted posthumously in 2004 to the International Boxing Hall of Fame. His biography there lists different statistics, perhaps because hall officials separated the amateur fights while Mahoney listed those as professional bouts. Nevertheless, the International Boxing Hall of Fame praised Corbett as a strong fighter who sparred with and defeated some of the best in both the welterweight and middleweight class.

Corbett had his first amateur fight in Fresno at fourteen when he weighed ninety pounds. White watched the fight, gave the young boxer his new name, and was also his early manager. Corbett never lost an amateur match-up. He was only nineteen when he met fifteen-year-old Gladys Padgett at the Rainbow Ballroom. It was love at first sight and they were married three years later on January 28, 1925. Five years after his retirement, Corbett and his wife were involved in a near-fatal automobile accident. His car hit a jack-knifed truck and Corbett was catapulted through the windshield. He suffered a serious head injury and was in a coma for ten days. Gladys sustained hip and leg fractures. Both recovered, but the trauma sapped Corbett's strength. Shortly after the advent of World War I1, Corbett purchased what would become Corbett's Lounge on the corner of Broadway and Mariposa Streets. The place was a haven for young servicemen and Corbett was generous in feeding them and loaning money to some. Corbett never forgot his roots and his close-knit family. Sadly, he suffered from Alzheimer's disease in his later life and died in 1993 at eighty-eight.