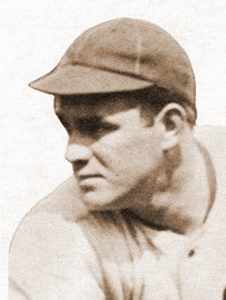 Howard O. Craghead graduated from Fresno High School in 1926 and signed with the Oakland Oaks of the Pacific Coast League that spring. Craghead, a big right-hander, was an All-Star for Fresno High from 1924 to 1926, averaging double figure strikeouts per game and he reportedly fanned twenty-four of twenty-eight batters in a game against Fresno Tech in 1926. He played a year with the Idaho Class 'C' team and was elevated as a starter for Oakland from 1928 to 1931. He was also a starter for the Long Beach Shell Oil team in the Los Angeles Winter League from 1927 to 1930. Craghead made it to the major league Cleveland Indians as a relief pitcher in 1931 and 1933, but only pitched twenty-three innings in thirty-one games, never winning or losing a game. Craghead pitched for Toledo in the American Association and was a twenty-game winner in 1934. He finished his Pacific Coast League career with Seattle from 1935 to 1938 and San Diego until 1944. Craghead, who was born in Selma in 1908, retired from baseball in 1944, joining the Navy where he became a lieutenant commander. Howard O. Craghead died in 1962