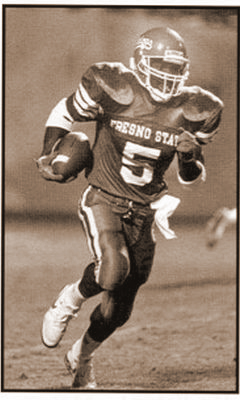 In the spring of 1989, Fresno State football recruiting coordinator, Pat Hill, had some very good news for his boss, FSU head coach Jim Sweeney. Aaron Craver was going to be a Bulldog. Coach Sweeney was most happy and felt that Craver would be key to the next two football campaigns for the Dogs. He was right. Over the next two seasons. Aaron Craver was a key to the Bulldogs' success as they compiled a 19-3-1 record including time in the Top 25 national rankings and winning a California Bowl along the way.

Aaron, a tough, hardworking running back from El Camino Junior College in Southern California, was a triple threat for Bulldog opponents. He was a ball carrier who could run with speed and move with great finesse, but he had the power to run tacklers over as well. He was also a sure-handed receiver and kick returner who could get the Bulldogs into excellent field position. Aaron was Fresno State’s first ever back-to-back 1,000-yard per season rusher, finishing his career with 2,316 yards rushing and another 421 yards receiving. He also scored twenty-eight touchdowns for the Dogs and still holds the school record for most touchdowns in a season with seventeen in 1990 and is tied for third (with Dale Messer) on the all-time Bulldog scoring list with 108 points (all touchdowns). Aaron was named to the All-Big West Conference First Team in both 1989 and 1990 and was elected to The Sporting News' AlI-American team (Honorable Mention) in 1989. The 1990 season was a unique one for Aaron; he played in three postseason all-star games. He was in the East-West Shrine game in Palo Alto, the Hula Bowl in Hawaii,and the Japan Bowl in Tokyo.

In the 1991 NFL draft, Aaron was chosen by the Miami Dolphins in the third round and he played there for three years (1991-1994). He moved to the Denver Broncos from 1995 to 1996, spent 1997 with the San Diego Chargers, and played from 1998 to 1999 with the New Orleans Saints. As he did for Coach Sweeney at Fresno State, Aaron filled whatever spot the team needed in the NFL He was a running back and a receiver, but also was a powerful blocking back, opening running lanes for Terell Davis in Denver when Davis ran for over 2,600 yards in 1995 and 1996. While playing for the Broncos, Aaron also gathered in forty-three receptions from John Elway, one of which was a nineteen-yard pass play that pushed Elway over 40,000 yards passing in the NFL. Craver scored two touchdowns in that game. He also scored two touchdowns in a 1998 game while playing for the Saints and one of those touchdowns was the result of an electrifying 100-yard kick return that Aaron ran back against the Minnesota Vikings. After his playing days were over, Aaron remained in the field he loves, becoming the head coach at Centennial High School in Compton, California.