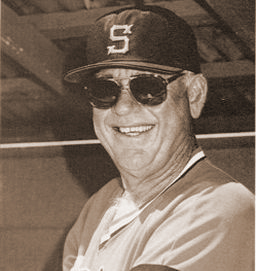 Adversity can create a thirst, either to succeed or to have a pity party. Allen Cropsey chose the former and was successful beyond his wildest dreams. On July 15, 1944 during the summer he lost his right arm while working on a newspaper conveyer belt. Cropsey had displayed all-around athletic talent in his sophomore season in baseball and football. Baseball scouts were already following the big left-hander both as a hitter and a pitcher. His finest high school game as a sophomore was a 1-1, eleven-inning tie with Valley powerhouse Tulare, coached by Pete Beiden, who would later became Cropsey's coach at Fresno State.

Cropsey used the knowledge he gained as a Beiden disciple to become one of the most successful high school coaches in Central Valley history. In thirty-four years at Selma High, he led the Bears to a 502-283 record with sixteen league titles and four Central Section championships. He was a six-time coach in the City-County All-Star Game, coach of the 1977 Northern California All-Star team, 1968 Fresno Hot Stove Dinner Coach of the Year, and 1969 Selma Citizen of the Year. In a 2008 interview, Cropsey commented on losing his arm: "It was one of those things that happen[s], but what really upset me was when the doctor told me the arm stump hadn't healed enough for me to play football his sophomore and junior years at Fresno High, Cropsey lost my junior year," Cropsey said. "I did play baseball that spring and football and baseball my senior year." Cropsey was an All-City football guard for the Warriors and a winner on the mound for coach Toby Lawless.

He entered Fresno State and started on a strong Freshmen squad that included several top local high school graduates. Cropsey taught and coached elementary and junior high sports for five years before being offered the job at Selma. "Selma hadn't much baseball success except for a championship in 1939 or 1940, but the school had a lot of good players who loved to play and were just waiting for someone to put the program together,” Cropsey said. "We had a great bunch of kids and the enthusiasm was unbelievable.I was fortunate to have future major leaguers like infielder Bobby Cox and pitcher Lloyd Allen. It is difficult for me to say which was my best team because of the year-by-year talented players we had. The team with Cox at second base was one of the best and Allen was the most dominant pitcher I had when we won four championships in a row."

Cox gave this tribute in a letter read at Cropsey's retirement dinner: "Your patient enthusiasm, but aggressive style was your trademark and your demand for excellence let us know that we could never be perfect, but trying to be was what it was all about...You weren't Just preparing us for games but creating a blueprint for life." The same drive that made Cropsey a top coach enabled him to also become a good golfer and bowler. Cropsey said coaching took a lot time, but he is proud of the way his wife Linda and his children supported him in everything he did. Allen Cropsey passed away in 2008.