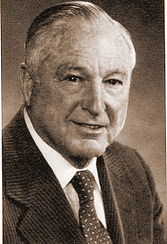 Crossland took his first springboard dive as a youngster at the old Fresno YMCA pool which he laughingly described as "bathtub-sized." When he reached Fresno High School, he won the San Joaquin Valley Division championships for several years in a row. Crossland was captivated by the springboard and continued to compete. The old college pool next to the gymnasium on Weldon Avenue didn't have facilities to satisfy his development, so he switched to the downtown indoor Crown Plunge which had a ten-foot springboard. The change paid immediate dividends while at Fresno State College. He met 1924 Olympic champion Al White, who took Crossland under his wing and was his personal coach for several years. In 1932, White induced him to join the famed San Francisco Olympic Club. Crossland wore that banner for six years. In 1936, he placed second in the Pacific Association Amateur Athletic Union Championships and, a year later, took top honors in the same event. Another notable win came in the ten-meter dive at the 1937 Duke Kahanamoku Swimming and Diving Championships in Honolulu, Hawaii. Crossland, White, and Ike Walton pioneered swimming and diving competition in the Valley. For more than twenty years, Crossland officiated as a diving judge. He also led the way from 1946 to 1950, bringing international swimming and diving events to Fresno.