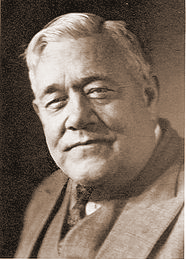 This pioneer educator and coach was a native of South Dakota, but came west and graduated from Stanford University. Geer was connected to the Coalinga school system from 1911 until 1921. In 1971, the athletic grounds at Coalinga High School were dedicated as the Charles L. Geer Athletic Field, an honor overdue since he died in 1944.

Coalinga had a student body of 150 in 1917 when Geer's track and field team team won the California Interscholastic Federation state meet. Geer was the Executive Secretary of the Central Section CIF from 1916-1939. He served as the referee of most of the state's prestigious track and field meets including the 1932 Olympic Games in Los Angeles. The 1940 and 1945 Fresno West Coast Relays were dedicated to him. Geer had a favorite saying that characterized his teaching and administrative ability: "Win a boy's respect and he'll give you his love."