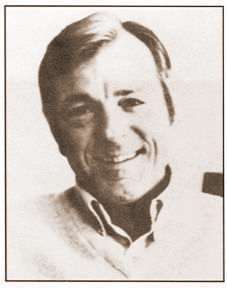 Mathias went to Tulare High-School where he was an outstanding athlete on the football field, the basketball court, and the track. Bob was a force on the Tulare Redskins, leading the team to division championships and the CIF playoffs. He was also an All-Conference basketball player for Tulare and averaged eighteen points per game as the Redskins took titles in Bob's junior and senior years. In track and field where he was adept in sprint, high jump, discus, long jump, and hurdles, Mathias attracted much attention throughout the area. His continual record-breaking performances were already generating substantial press coverage. In the 1947 and 1948 West coast Relays, Bob set new marks while winning the shot put, the low hurdles. the high hurdles, and placing in the high jump and the discus. He twice received the WCR Zeta Mu Alumni Trophy as Outstanding High School Athlete. In 1948, Mathias was the California State Champion in both the low and high hurdles and placed in the shot put.

During his high school track and field career, Bob took forty first places and set twenty-one records. At the suggestion of his Tulare High football and track coach Virgil Jackson, Mathias tried out for a decathlon meet in Los Angeles. After watching Bob in high school, Coach Jackson felt that Mathias was versatile enough to compete in many of the genres but it would be quite a process to master unfamiliar elements such as the javelin. In addition, Bob would have to jump higher hurdles and conquer the grueling 1500 meters within two weeks. Mathias figured he had nothing to lose and began training to take on some of the best college and AAU athletes in the country. His preparations required assistance from family, friends, and neighbors, but the effort definitely paid off. After shocking track and field veterans with a victory in Los Angeles, newbie Mathias learned he was eligible to compete in the Decathlon Olympic Trials in New Jersey.

Once again, Bob's own work ethic and community support teamed up and he not only qualified for the U.S. Olympic team, but won the decathlon trials. At seventeen, Mathias found himself in the U.S.S. America, crossing the Atlantic Ocean to compete in the 1948 Olympics. History was made in London as Bob Mathias stunned the world by becoming the youngest track athlete ever to win an Olympic gold medal. This was the beginning of the inspiring career of Robert Bruce Mathias. He captured gold again in the decathlon at the 1952 Olympic Games, topping the second place finisher by 912 points. Now known as the world's greatest athlete, Mathias continued as a football standout as well. He led Stanford University to the Rose Bowl by demonstrating feats of epic proportions in the Pacific Coast Conference showdown game against USC. In front of over 100,000 screaming fans, Bob ran back a kickoff for an electrifying ninety-six yards to give Stanford the lead. A second touchdown romp in the fourth quarter helped Stanford prevail in the battle, 27-20.

After college, Bob turned down a National Football League draft offer from the Washington Redskins and enlisted in the U.S. Marines. In 1956, Bob was denied an opportunity to earn a third Olympic decathlon gold medal when he was ruled ineligible by Avery Brundage of the Olympic Committee. In those days, only amateur athletes could participate in track and field in the AAU or at the Games and Mathias was deemed a professional due to his starring role in an Allied Artists movie called The Bob Mathias Story for which he received a salary. This was a sad decision particularly because Bob was in great shape at twenty-five and undefeated in decathlon competition. However, Hollywood came calling again and Mathias appeared in six more movies in addition to starring with Keenan Wynn in "The Troubleshooters" on NBC. He enjoyed working in the movies and on television shows, but didn't much care for the glitter of Hollywood. In his heart, he was a small town guy who enjoyed being with family and friends.

Mathias eventually bought land in Kings Canyon National Park and built the Bob Mathias Sierra Boys Camp, followed by the Bob Mathias Sierra Girls Camp. Over the years, Bob was a traveling ambassador for the United States, beginning in President Dwight Eisenhower's administration. His activities took him across the globe where he was greeted by presidents, prime ministers, and kings. Years later, Bob would run for political office and spent four terms as a Congressman in Washington, D.C. He also served as the director of the United States Olympic Training Center in Colorado Springs. During his eight years in that position, Bob built the camp into a state-of-the-art training facility and one of the best training centers anywhere. One of Mathias most outstanding traits was his remarkably caring and considerate personality. He would always take time to give a smile, a handshake, or an autograph to anyone who asked. Mathias lived in Fresno for the last years of his busy life. He and wife Gwen, enjoyed traveling, sometimes by plane, but also in their pickup truck and camper, often to their vacation home in Kings Canyon where they welcomed many friends for weekend campouts and parties. Bob Mathias passed away on September 2, 2006 in Fresno, leaving behind an unparalleled and memorable legacy.