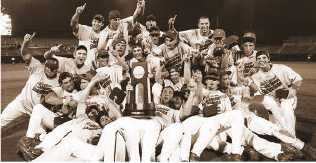 Entering the WAC Tournament with a 33-27 record, the underdogs transformed themselves into Wonderdogs, overcoming injuries and long odds to claim the NCAA College World Series with a 6-1 victory over Georgia in the championship game.

It was the first CWS baseball title for Fresno State, which finished the season 47-31.

The Bulldogs went undefeated in the WAC Tournament and won their NCAA Regional, having to bounce back from a 15-1 loss to the University of San Diego. They lost to 12-4 in the opener of the Super Regional to host Arizona State, but beat the Sun Devils 8-6 and 12-9 to earn the trip to Omaha.

The team plane to the College World Series was rerouted 50 miles west of Omaha after struggling with weather problems throughout the flight.

In the title game, Justin Wilson walked one and struck out nine in the longest effort by any pitcher in the 2008 CWS. He threw 129 pitches over eight innings on three days’ rest.

"Justin coming back like that was something special," said third baseman Tommy Mendonca, who earned the CWS Most Outstanding Player award.

Mendonca was special himself. He hit four home runs, drove in 11 runs and sparkled defensively.

Right fielder Steve Detwiler plated all six runs in the title game with two home runs and a double — despite playing with a torn ligament in his left thumb that was awaiting surgery.

"That's a kid who has been playing for us for the last two months with one thumb. And I mean one thumb," said Bulldogs Coach Mike Batesole. "He's just made of heart."

Fresno State tied a CWS record by scoring 62 runs. The offensive explosion, combined with standout pitching at crucial times, enabled the Bulldogs to become the lowest seed in history to win an NCAA title in any sport. And they did it by staying alive in six elimination games, including two against Georgia.

In addition to Mendonca, four other Bulldogs were named to the All-CWS team: Wilson, Detwiler, outfielder Steve Susdorf, and second baseman Erik Wetzel.

The team was invited to White House, where President George W. Bush quoted Detwiler: "Pain is temporary, pride is forever."