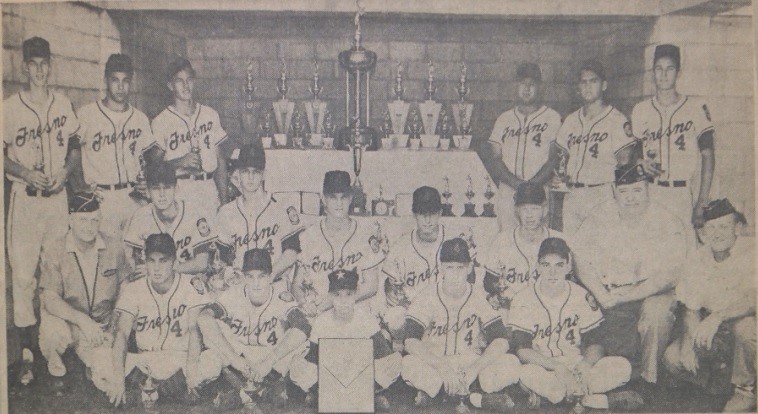 Jake Abbott knew pretty early on in the summer of 1960 that his American Legion baseball team was special.

"At the high school level, pitching is important," he said. "With these two kids, Wade (Blasingame) and (Dale) Williams, we would be tough to beat. We had some kids who were pretty good hitters, too."

Abbott was the head baseball coach at Roosevelt High School for seven years. He won three valley championships during that span. However, arguably his greatest achievement at Roosevelt was a team he coached when school was NOT in session.

Fresno Post 4, which had six of its 15 players go on to play professional baseball, only lost four games all summer. The team went 16-2 during its league season, followed by a sweep over Delano and a series win (two out of three) over Modesto to qualify for the championship tournament in Stockton. Coach Abbott recalls a "tape measure" home run by Jerry Rosser to help Fresno Post 4 beat Modesto.

The aforementioned Dale Williams pitched one of the games at the championship tournament in Stockton, striking out 15 batters in a win over West Covina. And when Williams was not pitching, it was typically Wade Blasingame on the mound.

Just 17 years old that summer, Coach Abbott referred to Blasingame, the future Major League pitcher, as having "probably the best curveball (he) ever saw." Blasingame and Williams are two of the best pitchers to ever come out of Roosevelt High School.

After winning the state championship in Stockton, Fresno Post 4 advanced to the western regional finals in Bend, Oregon. The team saw its season end in the championship game against Arizona. "We simply ran out of pitching," said Abbott.