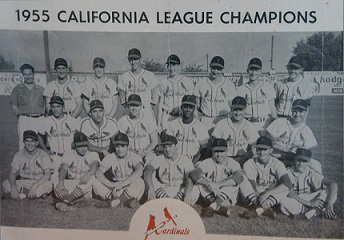 In 2001, the National Association of Professional Baseball Leagues celebrated its 100th year. As part of that celebration, a couple of historians put together a list of the top 100 minor league teams of the previous century. The 1955 Fresno Cardinals were on that list, checking in at No. 79.

In 1955, the Fresno Cardinals were in their 12th season as an affiliate of the major league club with the same nickname (St. Louis). They played in the California League, and they won the league championship, beating Stockton, three games to one.

Individually, Bobby Gene Smith hit .370 in 1955 to win the California League's batting title. Smith, who was just 21 years old, also led the league in RBI (141) and total bases (318). Benny Valenzuela was not far behind, hitting .354. His 209 hits were a California League record for a single season.

On the mound, Fresno produced a pair of 20-game winners in 1955: Glen Stabelfeld and Tommy Hughes. Stabelfeld (24-4) led the California League in wins, while Hughes (20-6) led the league in strikeouts (273).